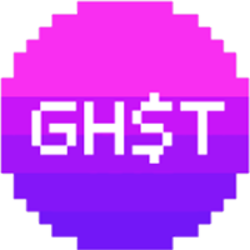 Aavegotchi is an open-source, community-owned NFT gaming protocol that allows gamers to own their assets and is based on the Aave protocol. As a result, we can claim that Aavegotchi combines several popular components of cryptocurrency into a single ...Moreplatform, including decentralized finance (DeFi), blockchain games, staking, and digital land ownership. Aavegotchis' game avatars can be used as DeFi collateral to gain staking incentives. Each Aavegotchi avatar has a pixelated ghost appearance. The Aavegotchi ecosystem's principal utility token, GHST, is used to buy and sell items within the Aavegotchi universe.Less

A quick snapshot of Aavegotchi ROI (return on investment) over different time periods.

Aavegotchi underperformed in similar projects, which had 0% growth over the past year.

Aavegotchi underperformed in crypto market, which had 0% growth over the past year.

A successful project is based on a foundation of a well experienced team. Take a closer look into Aavegotchi's team.

Cryptologi.st
Aavegotchi Report - 2023 Feb 05
Compare Aavegotchi with other projects on https://Cryptologi.st. Also there are more crypto projects with higher gains which are extremely undervalued in today's market.

A project backed by well-known investors is a strong signal for success. Take a closer look into Aavegotchi's investors.

Project announcements and news have a significant impact on the price. Below are live updates from Aavegotchi's Twitter and Reddit accounts.